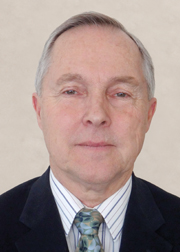 A key member of the North Bay Chapter executive for the past 14 years, John has greatly contributed to its long-term success through his enthusiasm for the profession and its connection to his community.

A respected leader who chaired the chapter in 2009, John has always been willing to get involved in the planning and staging of events to raise the profile of engineering. He led several chapter committees dedicated to promoting the profession to students and the public, such as the committees to organize Engineer’s Day, bridge building competitions, science fairs and Student’s Nights. For years, he was also involved in the Spring Fling, a fundraiser that brings together local engineers for an evening of networking to benefit the Community Living Association, which provides support to people with intellectual disabilities.

One of John’s most valuable contributions to the chapter is his tireless recruitment of new volunteers. His willingness to mentor and encourage their involvement has provided the chapter with a wealth of new ideas and generated greater exposure for the chapter in the community and local industry.

Most recently, he was part of a chapter initiative that successfully advocated for the establishment of an engineering degree program at Nipissing University. As a result of his efforts, the process to establish the program is now underway and it is hoped this will reduce financial barriers for local students wishing to study engineering and help companies in northern Ontario attract and retain engineers.