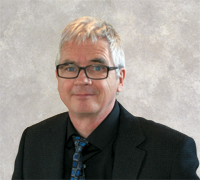 Described as the kind of executive any chapter would be grateful to have, Gary Mahony has served on the board of the Kingsway Chapter with humble diligence since 1992. Six times the chapter chair and five terms the vice chair, Gary has been an influential leader and stable influence to the local engineering community.

His enthusiasm for making working models demonstrating engineering principles, combined with his ability to simplify complex scientific and technical experiments, serve him well as the chapter’s Education Coordinator. Gary passionately promotes engineering to students of all ages and he has been involved in staging several prominent events during National Engineering Month, including the highly successful, multi-chapter Engineering Idol event.

Building cooperation and collaboration among neighbouring Toronto-area chapters as coordinator of the Quad Chapter Licence Ceremony organizing committee, he has been a key contributor to the significant growth of this semi-annual event that pulls together four chapters and draws upwards of 200 people.

His encouraging attitude is likened to remarks by actor Leonard Nimoy, who said: “The miracle is this: the more we share, the more we have.”

Hands-on, how-to workshops for kids on making water rockets, 3D digital movies, wooden geared clocks and experimental musical instruments are among the events Gary has organized to promote the engineering profession to chapter members and the general public.