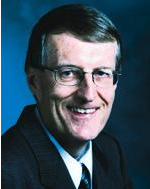 As an industry leader in the area of electronic cheque and image exchange, Wayne Doran has contributed significantly to developing many standards that are expected to revolutionize the future of cheque processing-moving it from a paper-based to an electronic-based payments system. During his more than 30 years at NCR Corporation, Doran has played a key role at the Payment Solutions Division in Waterloo, Ontario, in helping to develop NCR's electronic document imaging, bank processing and electronic cheque data and image exchange technology. He is also respected as an industry leader in electronic cheque and image exchange in the financial services sector and has been one of the driving forces behind several innovative cheque processing products and solutions for the global financial industry. A number of the standards he helped develop are now integral requirements to support the proposed Check Truncation Act, currently before the United States Congress. The implementation of this Act will be one of the most significant changes in the U.S. payments system over the last 20 years, and the technology and standards that he has helped build will be instrumental in what is ultimately passed into law. In 2002, he received the NCR Fellow Award, the highest individual honour in NCR Corporation's global Research and Development Awards category. He was the first Canadian to earn this prestigious NCR award, a company-wide initiative that recognizes innovative ideas and an ongoing record of technical achievements. Since the inception of this recognition program, only 20 NCR associates have received this award worldwide. Doran has played a key role in moving the financial item processing industry toward the adoption of open industry standards for cheque image exchange-the next critical step in the evolution of cheque processing. He is a member of the Institute of Electrical and Electronics Engineers (IEEE) and has held leadership positions on the accredited American National Standards Institute (ANSI) X9B Standards Committee, which is developing standards to support cheque truncation and image exchange in the U.S. Doran is a sought-after expert by industry-standard groups, and mentors younger engineers by continually encouraging them to strive for excellence and maximize their contributions to the team and to the profession.