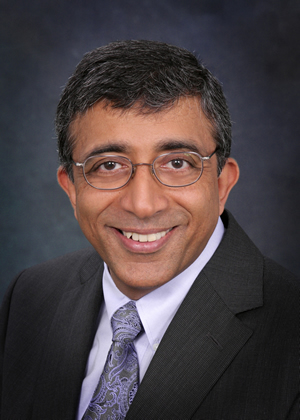 Underlying Dr. Nazir Kherani’s research career is the theme of energy, leading him to pioneering work in the fields of tritium and solar science and technology.

As a senior scientist with Ontario Hydro Research Division, Dr. Kherani became recognized as an international expert in tritium science and technology and his work led to the development of world-class tools for the detection, safe handling and storage of tritium as used at CANDU stations and tritium laboratories around the world. His fundamental research led to the development of tritium as a probe in the study of hydrogenated amorphous silicon, a thin film photovoltaic material, while other investigations led to novel integrations of tritium as a micro and nano power source.

Upon joining the University of Toronto as an Associate Professor in 2002, Dr. Kherani directed his attention toward renewable energy, in particular photovoltaics - the conversion of solar energy into electricity. Funded by a $5-million grant from the Ontario Ministry for Research and Innovation, Dr. Kherani is leading a team of researchers in a project to develop low cost, high efficiency silicon and allied photovoltaic materials and devices.

The research is based on unique, thin-film-synthesis processes and innovative solar cell topologies, which are amenable to large-scale manufacturing. The aim of the project is to reduce the cost of solar energy and help take solar power mainstream. His research is making a significant contribution to the development of solar as a viable green energy technology in Canada, and has spurred international university-industry affiliations and international enterprises in photovoltaics.

Dr. Kherani’s research and development has led to more than 100 publications in such prestigious journals as Advanced Materials, Optics Express and Applied Physics. He has five U.S. patents and is the author of a textbook on electrical fundamentals for undergraduate students.