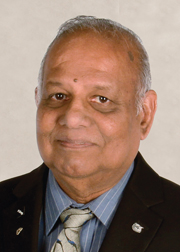 As a member of the Scarborough Chapter executive for the past 12 years, Madu has possessed seemingly limitless energy and optimism to go along with an uncompromising attitude towards raising the profile of the chapter in the local community.

Since immigrating to Canada in 1996, he has shown a commitment to mentoring other international engineering graduates. Through ACCES Employment, where he also works as a part-time computer instructor, Madu has volunteered his time to deliver monthly workshops and individual coaching to newcomers, offering assistance in preparing their work experience records and applications for PEO licensure.

Madu has also been involved in creating several innovative and successful programs aimed at sparking an interest in young people in considering electronics and engineering as careers. They include PEO’s Engineer-in-Residence program and his chapter’s Mathletics competition. In 2005, he helped develop a souvenir magazine for the chapter’s Popsicle stick bridge building competition that made enough in advertising and sponsorship sales for the chapter to award scholarships to first-year engineering students.

In 2011, Madu created Mechatronics, a competition for high school students in which they must design, assemble and operate a car using parts provided by the chapter. He has also established Mechatronics Clubs in area high schools, enabling students who might not have the resources to attend costly robotics clubs an opportunity to become engaged in the field.

Today, Madu is working on a new project, called STEMZ, aimed at educating high school students on science, technology, engineering and math, as well as art, finance and other essential subjects for self-improvement.