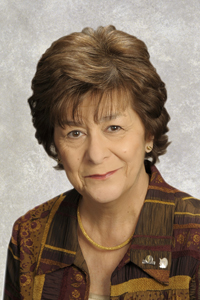 Since her induction into the Order of Honour as Member in 1994, Márta Ecsedi has continued her dedicated volunteer commitment toward ensuring the profession is inclusive and recognizes the contributions of its licence holders.

A champion of PEO’s award programs, Márta was a member of the Awards Committee for 15 years, chairing it for five of them to lead the group that solicits and evaluates nominations for PEO’s Order of Honour and the Ontario Professional Engineers Awards. She also promotes the extraordinary contributions of licence holders as an active member of the committee’s External Honours Subcommittee.

Chair of the G. Gordon M. Sterling Engineering Intern Award subcommittee since 2009, Márta facilitated development of the selection criteria for the new award. First presented in 2010, the Sterling award promotes leadership development and is available annually to those registered in PEO’s Engineering Intern (EIT) program. Márta actively promotes the award to EITs and encourages them to pursue licensure.

Also passionate about ensuring an inclusive profession, Márta has chaired the Equity and Diversity Committee since 2004. In 2011, the committee’s draft policy and action plan to integrate equity and diversity values and principles into PEO operations were approved by council. The objective of the policy is to ensure a PEO environment where all stakeholders are treated equitably and members of diverse groups are recognized, welcomed and valued.

In addition to her committee work, Márta contributed to PEO governance as a Councillor-at-Large from 2006 to 2008.

Whether collaborating with other engineers, mentoring the next generation, or supporting the advancement of PEO itself, Márta has been an exemplary ambassador for the engineering profession.

“I have been passionate about my volunteer work with PEO since I first chaired the Women in Engineering Advisory Committee 25 years ago,” she says. “I have been very lucky to have many more exciting opportunities to contribute to our profession. It’s a privilege to serve and I will continue to do so.”