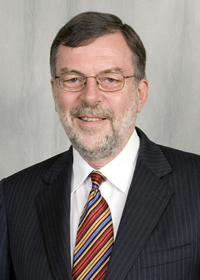 For more than 30 years, Jan Carr, Ph.D., P.Eng., has been a strong and innovative leader in Canada’s evolving electricity sector.

In 2005, Dr. Carr was appointed as the first Chief Executive Officer of the new Ontario Power Authority (OPA). Navigating in uncharted waters, he has built a highly professional and skilled organization, responsible for ensuring Ontarians’ continued access to a reliable and sustainable electricity supply.

Prior to founding the OPA, Dr. Carr contributed significantly to the provincial electricity sector, most recently as Vice Chair of the Ontario Energy Board and previously as a member of the Advisory Committee on Competition in Ontario’s Electricity System, chaired by the Honourable Donald Macdonald. In 1981, he was elected a Commissioner of the Niagara-on-the-Lake Hydro Electric Commission and went on to become its Chairman and a member of the Board of Directors of the Municipal Electric Association.

From 1985 to 2001, he worked with the Acres group of companies, where he was responsible for several areas, including the overall planning and engineering of electricity projects and systems in Canada, the United States, Asia, Africa, and the Caribbean. While in Niagara Falls with Acres, he began his ongoing efforts to preserve and reuse the 100-year old generating stations there.

Dr. Carr is widely known throughout Canada’s electricity industry as an advisor to utilities, governments and others on the financial, business, strategic and policy aspects of the electric power industry and has led negotiations on the sale and reorganization of electric utilities. He has been a Director of both publicly traded and privately held companies and chaired the Electricity Task Force of the Toronto Board of Trade. His career involves experience from many perspectives – utility employee, publicly elected Commissioner, private sector board member, stakeholder advocate, professional advisor, executive and always proudly an engineer.