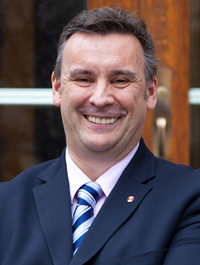 Stewart Aitchison has earned a remarkable reputation as an innovative researcher and entrepreneur through his internationally recognized work in non-linear optics, nano-photonics and lab-on-a-chip technology.

Dr. Aitchison’s recent research has increasingly focused on developing lab-on-a-chip technologies, which will have a major impact on health outcomes in developing countries, and wider applications in the diagnosis of infectious diseases. His research team developed a point-of-care HIV monitoring system that can produce test results in 10 to 15 minutes and will support healthcare in under-resourced regions of the world. In 2009, he co-founded ChipCare Corporation to commercialize this technology and within six years had secured $7 million in funding to develop the system. The company now employs 14 people and is field testing its final instrument. This project was recognized with the University of Toronto Inventor of the Year award in 2012 and the Canadian Business magazine Innovation Award in 2010.

Since 2013, he has served as the associate scientific director for the India-Canada Centre for Innovative Multidisciplinary Partnerships to Accelerate Community Transformation and Sustainability (IC-IMPACTS). The network is the first, and only, Canada-India Research Centre of Excellence established through the Canadian Networks of Centres of Excellence and funds collaborative research between the two countries in the areas of safe infrastructure, clean water and public health. The network has supported researchers who have provided clean water solutions to First Nations communities, deployed new road technologies in India and developed new portable health care solutions.

In addition to his own research and partnerships, Dr. Aitchison has made significant contributions to engineering research and development through the University of Toronto. From 2004 to 2007, and from 2010 to 2011, he served as director of the school’s Emerging Communications Technology Institute, an open research facility currently supporting the research of approximately 125 graduate students working in nanotechnologies. There, he successfully raised $12 million of infrastructure support to establish a state-of-the-art electron beam lithography system for the facility. He has also been the Nortel Chair in Emerging Technology in the Department of Electrical & Computer Engineering since 2001, and was Vice Dean, Research for the Faculty of Applied Science & Engineering from 2007 to 2012, where he oversaw a 45 per cent increase in federal funding and a 75 per cent increase in major partnership funding.