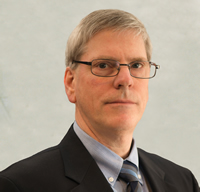 Praised for his vision and leadership, David Euler has earned the respect of his colleagues through years of impactful contributions to the profession in Ontario and across Canada.

David’s commitment to his local chapter in North Bay comprises three decades of active involvement, including chairing the chapter executive for two terms during his 11 years of service on the executive. During this time, he played a leading role in all of the chapter’s major initiatives, including its largest–the annual Engineers Day Symposium–for which he developed a planning tool in 2002 that is still used by the event’s organizers.

David further influenced the governance of the profession following his election to council in 2006 as a Northern Region Councillor. His reputation as a trusted voice on council was evidenced by his appointment to some of PEO’s most influential committees, including the Executive and Human Resources and Compensation committees. He was elected to chair council meetings during the 2011-2012 council term. His steady hand in the latter role helped shape and move forward several significant initiatives, including a package of numerous and significant changes to the Professional Engineers Act, measures to increase labour mobility for engineering licence holders across Canada, and a new governance model for Engineers Canada.

David’s diverse volunteer commitments to PEO also included service on the Discipline and Regional Councillors committees and the Joint Relations Committee of PEO and the Ontario Society of Professional Engineers.

Following his retirement from council in May 2012, David continued to work for the profession at the national level as a PEO appointee to the Board of Engineers Canada, serving on the Finance, Governance, and Public Infrastructure Vulnerability committees.

David now helps steer development of PEO’s Ontario Centre for Engineering and Public Policy as vice chair of its inaugural advisory board.

“It really is a privilege to serve our self-regulated profession,” says David. “I am just one of many that contribute to perform the work of the association. PEO has over 900 member volunteers that participate at all levels. The future of the profession certainly bodes well when you consider the collective dedication and passion of our staff and this huge pool of volunteer members.”