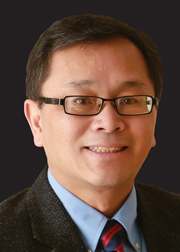 A long-time member of the North Bay Chapter, Raymond Hong is widely recognized as an engaging leader and mentor to engineers in his community.

Upon graduating from the civil engineering program at Lakehead University in 1993, he was inspired to become more involved with his chapter by Order of Honour Member David Richards, P.Eng. Ever since, Raymond has actively recruited engineers, including his colleagues at the Ontario Ministry of Transportation, into a variety of important chapter activities.

A member of the chapter executive since 1997, Raymond brought a stabilizing influence to the leadership group and helped to ensure the chapter’s financial stability for 10 years as treasurer. He also worked to improve communication to chapter members by redesigning the chapter newsletter.

To encourage the development of leadership skills amongst members and provide a networking opportunity for his colleagues, Raymond founded the North Bay Wings hockey team in 1998. The team comprises local professional engineers and engineering interns who compete in the annual Northern Region PEO Hockey Tournament.

Raymond says “it is important for engineers to volunteer with PEO to enhance awareness of the work we do and to promote the profession to students looking for a career path to follow.”

Putting his beliefs into action, he participated for nearly a decade on the North Bay Regional Science Fair Committee, chairing it for several years and igniting in students a passion for science and engineering. This annual event not only allows students to showcase their skills, but also raises the profile and enhances the image of engineering in the community.