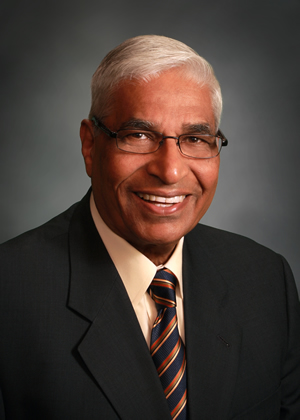 A world-renowned researcher in electrical machines and flexible power transmission systems, R. Mohan Mathur, PhD, P.Eng., FCAE, has contributed to the engineering profession as an innovative educator, academic administrator and as the architect of new and visionary initiatives that will influence the next generation of engineers.

Dr. Mathur has had a distinguished academic career as a teacher and researcher. After seven years as Head of the Department of Electrical and Computer Engineering at the University of Manitoba, he was Dean, Faculty of Engineering, University of Western Ontario (UWO). During his 12 years as Dean at UWO, he established first-to-be-accredited Integrated Engineering and Software Engineering programs, and the institution’s first Biomedical Engineering interdisciplinary graduate program, which has become one of the finest in Canada and is recognized world-wide.

In 1999, he retired from academe and moved to a major leadership position in industry as Vice President, Nuclear Training Support and Services Division, Ontario Power Generation.

A visionary leader, Dr. Mathur was the founding president and chief executive officer of the University Network of Excellence in Nuclear Engineering, an initiative promoting research and training through a consortium of 11 universities across Canada and the nuclear power industry that receives matching grants from the government of Canada. The network funds six industry research chairs that are attracting graduate and postgraduate university students to a career in the nuclear industry. He is also the founding member of the highly successful Manitoba HVDC Research Centre, a world leader in performing research and development in high voltage direct current (HVDC) and power electronics technologies, instrumentation, and simulation.

Dr. Mathur has published 66 refereed journal papers, 80 refereed conference papers and many invited conference presentations. He has supervised 11 doctoral and 18 master’s students and 16 post-doctoral fellows. He has authored two books on flexible power transmission systems, which have been translated into several foreign languages.