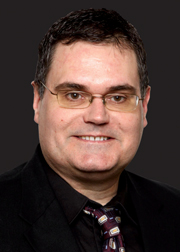 Since joining the London Chapter in 2005, Sydney Van Geel has tirelessly shared his enthusiasm for engineering by developing successful education outreach programs and providing leadership on the chapter executive.

In his first year with the chapter, Sydney assumed responsibility for organizing local National Engineering Month events and was successful in recruiting members to showcase local industries through organized tours and in creating initiatives to teach children about the profession.

“Working with kids to build bridges out of common materials and seeing their enthusiasm was fun and kept me looking for ways to expand the program,” he says.

His outreach efforts led to the establishment of the chapter’s now annual bridge building competition at the London Boys and Girls Club, a non-profit family recreational facility that provides activities for children and youth.

A strong proponent of the value of the P.Eng. licence, Sydney organized the chapter’s first EIT Information Night, an event at which PEO representatives review the licence process and provide information to those interested in becoming an engineering intern. As a result of its success, the program has since become a popular annual event.

He is also a tremendous supporter of several major PEO initiatives, including the Government Liaison Program, for which he has been an active participant on his chapter’s committee and played a key role in organizing and implementing a local all-candidates debate for the 2011 provincial election.

The value of his leadership to the chapter was confirmed when he was elected to serve as vice chair from 2007 to 2008, and subsequently as chair from 2009 to 2010.